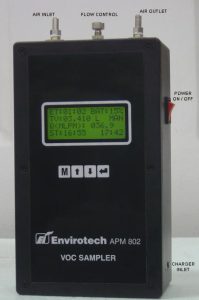 Over the years complex organic compounds have got into use in many diverse applications encompassing all types of human activities. While rural environments often have high levels of pesticides and other residues from sprays of weedicides and other chemicals used in modern farming, urban environments have high doses of a host of organics coming from paints & varnishes, lacquers, solvents, foam blowing agents, sprays etc.

Unfortunately a majority of these compounds are highly toxic and many of them have been reported to be carcinogenic. Recent addition of Benzene in petrol, in place of a lead compound, has made Benzene and its derivatives a part of vehicular pollution. Benzene concentrations in high traffic areas and near petrol pumps have become a matter of concern.

Organic compounds are also reported to be pre-cursers for Ozone formation and play a role in secondary formation of oxidants. All over the world air pollution monitoring networks are making intensive efforts for monitoring of specific organic compounds such as Benzene, Toluene & Xylene and other Hydrocarbons.

In India the Central Pollution Controlled Board (CPCB) has included Benzene as a parameter in Ambient Air Quality Standards revised in 2010. The method for measurement of Benzene requires Gas Chromatographic (GC) Analysis with two possible approaches: a) An air sample collected in the field in a Tedlar bag can be directly fed to a GC or b) VOCs are collected from ambient air by adsorption on a suitable collection matrix such as activated charcoal and desorbed for analysis via a GC.Both techniques require the use of a battery operated / portable instrument capable of drawing air at a low flow rate of a few mili-liters per minute.

The APM 802 VOC Sampler can be used to collect air samples in Tedlar Bags. Alternatively an adsorption tube may be connected at the suction port to trap VOCs present in ambient air. The APM 802 uses a digital flow-meter to accurately measure low flow rates in the range of 10 to 500 ml/min. Very low flow rates coupled with its feature of collecting a composite sample allows the user to collect a representative sample over several hours without fear of sample loss due to saturation or breakthrough in the adsorbing column. The Envirotech APM 802 is a battery operated instrument. After an over night charge the system will operate for a full 8 hour shift allowing comparison with TLV limits for toxic organics present in Indoor Environments.